On 19 October 2020, choreographer and dancer Ermira Goro began “The Walk” in the city centre of Athens. This durational performance entailed long daily walks, looping back and forth along the route of “The Grand Walk” (Ο Μεγάλος Περίπατος), an urban redesign of the city centre inaugurated in the summer of 2020 amid the Covid-19 pandemic. A highly controversial municipal project overseen by current mayor Kostas Bakoyannis, “The Grand Walk” extends from Omonia Square to the Kalimarmaro Olympic marble stadium, and traces the main avenues and squares of neoclassical Athens, primarily the 19th-century neoclassical buildings along Panepistimiou Street, Syntagma Square and the parliament, and the avenues surrounding the Zappeion Gardens. Goro’s “The Walk” along the route of “The Grand Walk” ended on 17 November 2020 and lasted for a total of 30 consecutive days. 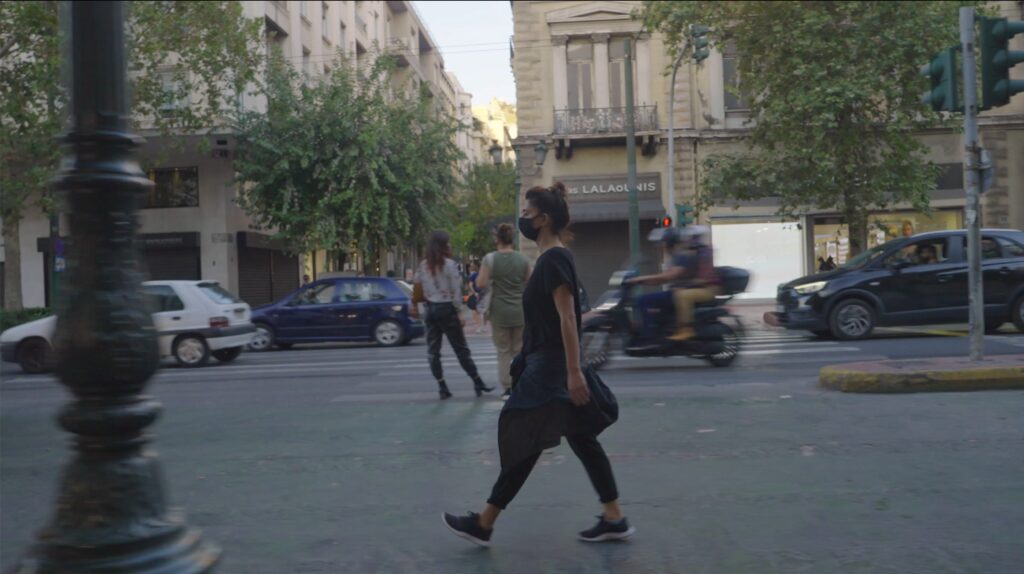 What endures and what questions emerge from Goro’s performance? In an interview, Goro expressed the importance that “The Walk” take place without an audience and largely unbeknown to the public.1 This invisibility problematises the common economic and social structures that determine the consumption of performance, and highlights the strenuous work and daily grind that often go unnoticed, and unremunerated, in the production and reproduction of artistic labour. Thus, Goro’s walk was an insistent and repeated doing that means and produces “nothing” in terms of the market and larger spheres of exchange value. Paradoxically, this walking as a doing of “nothing” of choreographic and artistic value is bound up with the doing of “The Grand Walk” by the municipality as one of supposed increased cultural, social and urban value framed through the logics of historical linearity and symbolism, gentrification and market speculation. This controversial urban project, largely decried by the Athenian public as an ugly and unnecessary city plan in which money was wasted on a dysfunctional, traffic-inducing redesign of the city centre, seemingly serves no purpose except to glorify a past neoclassical “greatness” so as to move funds and fulfil contracts. While the number of deaths increased as she walked, as hospitals were overstretched and underfunded, and people “did time” under lockdown and quarantine, Goro shared with me her silent speculations: “Where does my walk lead to? Where does ‘The Grand Walk’ go and what does it aspire to?” Her own ruminations on this walk to nowhere, back and forth, entailed larger questions about extended time, presence and contemplation; the inner workings of social and cultural reproduction; the work designated as essential in times of biopolitical crisis; the economic and social inequities further exposed by the pandemic; the lack of support for cultural and art workers under lockdown conditions; and economic “scarcity” coupled with the audacious and shocking waste of public funds.

As she walked alone, as the days and hours rolled on, Goro deepened her questions surrounding artistic survival and sponsorship, “career” and “reward.” And as she began to feel physical pain and exhaustion, she further meditated on the relationship between artistic purpose and expression, completion and incompletion, silence and invisibility, and just got on with it, “it” being here “nothing” more than walking, a keeping on keeping on. She wondered: Can the art of endurance push the limits of performance practice without an audience? How was this everyday practice related to life in quarantine without a fixed aim or direction? In our interview Goro concluded: “Nowhere is a somewhere else.” 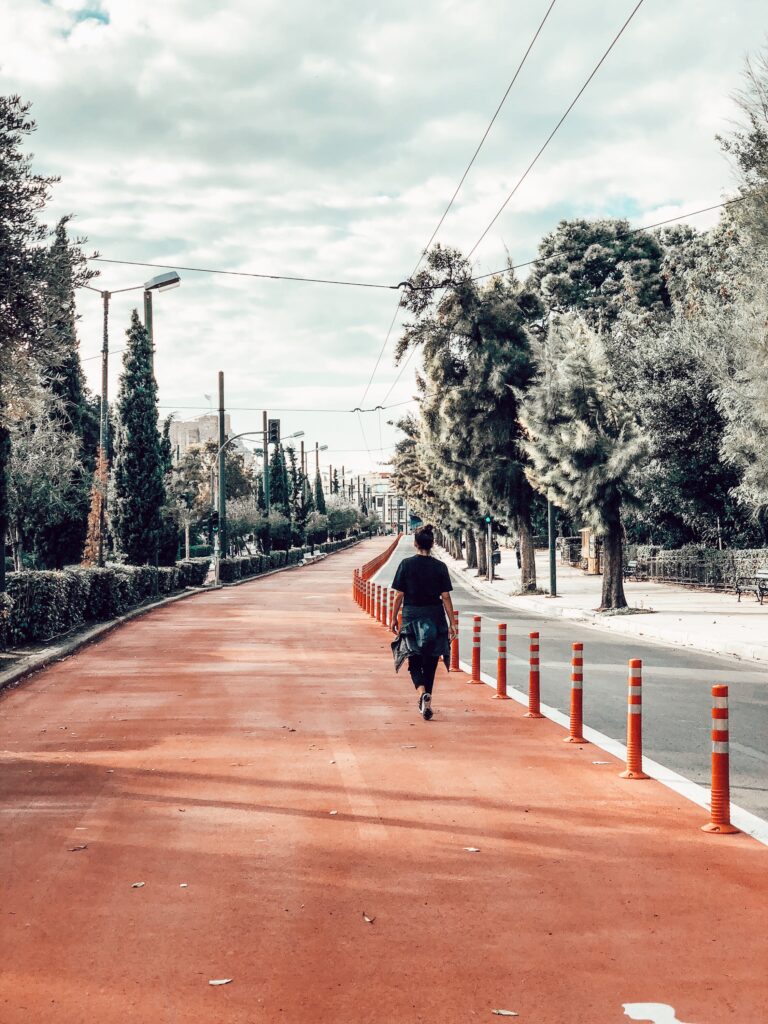 Although not intentional, Goro’s walk without an audience created different publics. The few friends who knew of her project would occasionally join her, walking alongside her in silence. Some of those friends told others, visitors to the city who could walk with her, meet her for the first time, again in silence. But because Goro mostly walked on her own for hours back and forth along the same route, she began to notice and be noticed by those who also found themselves on that same route every day. People without fixed homes, workers in the surrounding stores and kiosks, daily commuters and passers-by, street cleaners. And as the days and hours grinded on, curious glances and greetings were shared. Fleeting friendships and resonances emerged (see the image of a child she met on the route who joined her for a while and the words on the child’s t-shirt). 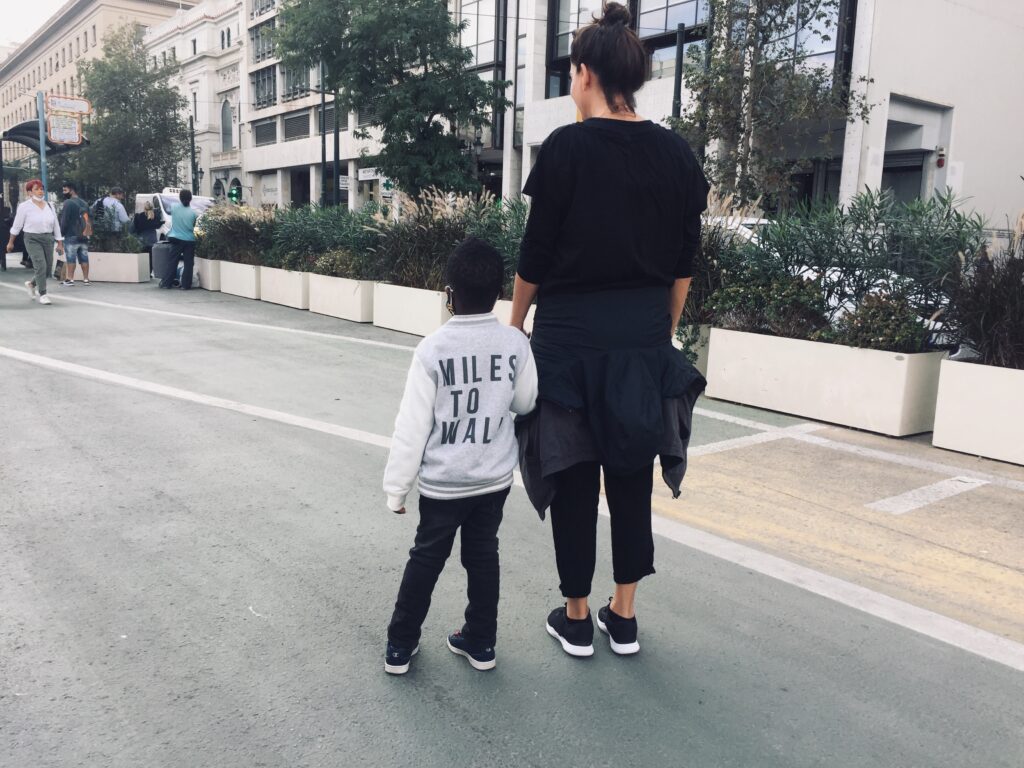 Goro expressed how she began to re-see the architecture of the city centre by way of her choreography of going nowhere, to notice the appearance and disappearance of different publics and demographics according to different spaces. She began to attune herself to what she describes as the “beautiful chaos” of the city centre; sensing, observing and meditating on the details of urban surfaces, the tarmac, pavements, pollution and dirt, walls, cracks, the changing surfaces of the urban and human body. She asked me: “How much do you need to walk to really see things?”

In her book Ricanness: Enduring Time in Anticolonial Performance, Sandra Ruiz critically engages with the “continual performance of bodily endurance against US colonialism, unfolding via aesthetic interventions in time.”2 Ruiz’s analyses of the work of Puerto Rican artists and revolutionaries who propel different measures of time through performances of aesthetic endurance are useful for “other sites under siege,” including a debt-ridden Greek context and Goro’s own durational performance.3 Ruiz’s problematising of linear historical and mechanical time by what she terms colonial “temporal looping” is echoed in Goro’s loops and the ways in which “the aesthetic helps us … do our time in life differently, within varying velocities.”4 Following Ruiz we can ask: How to endure the “Grand Walk” and its temporal projections (marked by its supposed return to and highlighting of the greatness of a neoclassical past that supposedly informs a great future, and where the historical fact that neoclassicism was a Northern European invention and aesthetic exported to Greece in the 19th century is conveniently ignored?). How is living in this country to endure ongoing forms of colonisation, crises and injustices, “and how to counter the demands of ‘capital time’ or … colonial time, through variations of time itself?”5 If living in Athens is an exercise in daily endurance and persistence, then Goro’s aesthetic of endurance reveals the ways “different political velocities may help us press pause on linearity, the horological event, consecutive narrative structures, historiography, and chronology.”6 Both Ruiz and Goro reveal how “the aesthetic teaches us about bearable ways of ‘doing time’ with our own bodies under subjugation,” resisting any simple testament to notions of resolution, completion and redress via performed exhaustion, negation and incompletion.7

The final day of “The Walk” coincided with another looping temporal event, that of the annual demonstration held in the city centre commemorating the student uprising against the US-backed Greek junta on 17 November 1973. Due to social distancing measures, the demonstration’s choreography entailed striking differences to the usual organising of the marches held on this date. People stood along the avenues of “The Grand Walk” masked and still, at equal distance from each other, in preparation for their collective walk to parliament. Goro weaved through the statue-like demonstrators and flanks of riot police, and kept on walking alongside the protestors as their formation began to move. As she strode along, things soon turned violent, and through the stun grenades and tear gas, Goro’s walk necessarily picked up another velocity as she began to run.

1 Interview conducted with the author on 9 April 2021. All the quotes of the artist are taken from this interview. For Goro’s larger practice, see www.ermiragoro.com (images and videos of “The Walk” are forthcoming).

Hypatia Vourloumis is a performance theorist. She is the author of Formless Formation with Sandra Ruiz (Minor Compositions, 2021). She teaches at the Dutch Art Institute.